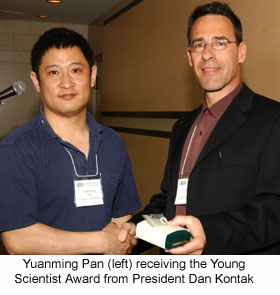 Yuanming Pan received his B.Sc. from the Wuhan College of Geology (now China University of Geosciences) in 1985. He came to Canada in late 1986 and received a Ph.D. (supervised by Michael E. Fleet) from the University of Western Ontario in 1990. He stayed at UWO for three more years as a postdoctoral fellow and then took a position at the University of Saskatchewan in 1993, where he was promoted to full professor in 2002. His research interests range from mineralogy, geochemistry, and mineral deposits to applications of mineral spectroscopy.

Yuanming Pan was educated in Earth sciences at The Wuhan College of Geology, Beijing, and the University of Western Ontario. His Ph.D. and postdoctoral research at Western centered on the mineralogy and rock-fluid interaction in the Hemlo gold mining district. In just a few short years, he authored and coauthored a wealth of original and innovative research papers on various aspects of mineral deposits: on calc-silicate minerals and hydrothermal alteration, Ba-micas, Ba-feldspars, vanadium minerals, REE-rich minerals and geochemistry, apatite, rock-fluid interaction, and geochemistry and alteration at the Hemlo gold deposit and the Manitouwadge VMS deposit.

After joining the University of Saskatchewan in 1993, Yuanming Pan’s research interests expanded into experimental studies, including the synthesis and crystal chemistry of apatite, the partitioning of Ba and Sr, and electron paramagnetic resonance (EPR) and infrared reflectance (IR) spectroscopy. Pan has pioneered the application of EPR to the distribution of trace elements in fluorapatite, including quantitative, quantum mechanical spin-hamiltonian analysis of rare-earth element siting. This research has opened the door for the structural investigation of trace-element problems that were never before tractable, such as non-Henry’s law behavior of REE partitioning. He is also the first to use EPR and cathodoluminescence in conjunction to characterize radiation damage in quartz from uranium orebodies in the Athabasca Basin. Pan is now an international expert on mineral-fluid interaction in skarns, the geochemistry of phosphates, and the application of mineral spectroscopy to problems in ore deposit mineralogy and geochemistry.

Pan has also been a leader in establishing and/or using unique analytical facilities. He is part of the team creating the first Canadian national EPR facility. He has received funding for and commissioned an XRF-microprobe. He has established a short-wave infrared reflectance (SWIR) spectroscopy laboratory and has used this instrument to document the type of clay alteration proximal to uranium orebodies in the Athabasca Basin. His publications on structural investigations of hydrocarbon compounds in the Athabasca and Witwatersrand Basins using Fourier transform infrared (FTIR), EPR, and magic angle spinning nuclear magnetic resonance (MAS NMR) spectroscopy to elucidate the roles of organic compounds in gold and uranium deposits are a first. His research on applications of synchrotron radiation X-ray spectroscopy to toxic species in mine tailings sets new standards for stewardship of the environment.

Yuanming Pan has produced highly original science consistently for 14 years and publishes prodigiously in peer-reviewed international journals. Yet his hallmarks are the range of topics, his multidimensional approach, and the creativity and originality of his studies. Furthermore, he is an eminent teacher of mineralogy, mineral deposits, and igneous and metamorphic geology and is esteemed by his students. In summary, Yuanming Pan has made a brilliant start to what will be an outstanding research career.

“Thank you Dan, thank you very much for your very generous words.

I am deeply honoured to receive MAC’s Young Scientist Award and would first thank MAC for such recognition. I must say that I was very surprised to find out that I have been selected for this award. In fact, when Brian Fryer phoned me about a month ago, I thought that he was chasing me for committee work. I am very grateful to all those people who took their time to nominate me and to the selection committee members for their support. Also, I would like to take this opportunity to express my gratitude to a few of those who have educated and inspired me thus far.

Upon my graduation in 1985, I received a national scholarship from the Chinese Ministry of Education to pursue graduate studies in Mineralogy/Economic Geology in Canada. My supervisor Prof. Chen Guangyuan told me that I should read the latest issues of the Canadian Mineralogist and select three Canadian professors to contact as my potential supervisor. This was long before emails became readily available. So, I had to write letters and waited patiently. Mike Fleet of Western was the first one who responded to my letter and had a firm offer for me to work on gold mineralization in the hot Hemlo area. So, I came to Western in September 1986. Western was certainly a very exciting time for me. Practically every weekend, I had field trips or parties organized by fellow graduate students. In fact, I went to two weekend field trips (one to the Bancroft area and another to Hemlo) and attended the Gold’86 International Conference in Toronto, all within the first month of my arrival. I have a lot of people to thank for making my years at Western most enjoyable.

Among them, I am most grateful to my supervisor Mike Fleet. It was from him I learnt what scientific research is all about. Mike’s dedication to research and his multidisciplinary approach are very good examples for me to follow. Also, Mike encouraged me to work on different projects in addition to my thesis research. In fact, I was working on five different projects during the final year of my PhD thesis. So, it was only natural for me to stay on at Western as a post-doctoral fellow after I finished my PhD. I owe a great deal of thanks to Mike.

I was fortunate once again when the University of Saskatchewan offered me a job in 1993, first a one-year contract and then a tenure-track position. I must thank all of my colleagues at U of S for their support and help over the last 11 years. Most recently, my department heads, Jim Basinger and Kevin Ansdell, have worked tirelessly on my behalf securing space and money to build an electron paramagnetic resonance (EPR) laboratory.

My research has benefited greatly from financial and logistic support provided by various resource companies and government surveys. For example, I enjoyed fieldwork with Fred Breaks of Ontario Geological Survey from1995 to1997, as part of my Lithoprobe projects. I received research funding as part of the Petro-Canada Young Innovator Award in 1998 and from the Cameco Corporation (and matching funds from NSERC’s CRD program) for various applications of mineral spectroscopy over the last six years. I am very grateful to Vlad Sopuck, Dave Thomas and Ken Wasyliuk of Cameco for their continuous interest in and support of my research.

Finally, I would like to emphasize that most of my recent research work involves collaboration with others, including visiting scientists, post-doctoral fellows and students. Over the last 11 years, I have been fortunate to attract a large number of visiting scientists, post-doctoral fellows and graduate students, many of whom have PhD/MSc degrees in physics or chemistry. I have learnt a lot from working with many of those individuals. So, I would like to close now by thanking all of my friends, collaborators and students for continuing to provide me with an education.