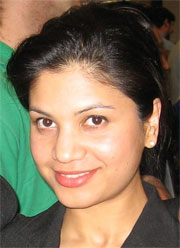 Sytle Antao is a mineralogist who studies the crystal structures of minerals under different conditions of pressure (P), temperature (T), and composition. She uses state-of-the-art in situ experimental techniques to investigate their stabilities and properties, and applies the results to mineral physics and Earth processes. She obtained a BSc in physics and geology and an MSc. in mineralogy and crystallography from the University of Kuwait. After her PhD degree from Stony Brook University, she spent two years at the Advanced Photon Source, Argonne National Laboratory as a postdoctoral fellow, and then joined the University of Calgary in 2008 as an assistant professor. She was awarded the Alberta Ingenuity New Faculty Award in 2009.

She has characterized several minerals, such as calcite, dolomite, aragonite, and spinel, under different P T conditions. In the case of dolomite, she has shown that the cations disorder with P and T, whereas for calcite, the CO3 anion group disorders with T. For magnesioferrite spinel, the magnetic transition and cation relaxation affect P and S wave velocities. Elasticity in materials is strongly affected by their state of order. Sytle has studied the rigidity behavior of glasses as a function of P using ultrasonic interferometry because glass transitions (especially second order or higher) are difficult to observe with other techniques. She also characterized short-range order in various nanoscale iron sulfide materials, glasses, and nanocrystalline gold. She already has nearly 50 peer-reviewed publications in various journals.

Sytle M. Antao earned her PhD in mineralogy and crystallography at the State University of New York, Stony Brook in 2006. She did post-doctoral research at the Advanced Photon Source in Chicago through 2008. She then joined the Department of Geoscience at the University of Calgary as an Assistant Professor. During her time in Chicago, Sytle was a team member at Beamline 11-BM of the Advanced Photon Source, working in the development of high-resolution synchrotron-based X-ray powder diffraction capabilities. She has continued to combine high-quality synchrotron diffraction data and Rietveld crystal structure analysis to address mineralogical problems.

Her studies mostly pertain to properties of minerals that are important in environmental issues, and are directed at increasing the quality and sustainability of life on Earth. Sytle has examined the structures of minerals, often under elevated temperature or pressure conditions, ranging from sulfates through carbonates to silicates and even glasses. She has probed the structural properties of calcite minerals under extreme environments to learn more about their behavior during carbon storage. Her studies relate structural parameters in important mineral groups across a range of conditions, spanning from biogenic materials to high temperature-driven order-disorder transitions.

She currently has two graduate students studying garnet crystalline solutions. Sytle has made important contributions to our understanding of nanoscale mineralogy, perhaps most notably in ferrihydrite and and mackinawite.

For her contributions to the mineral sciences in Canada, MAC is pleased to present Sytle M. Antao with the Young Scientists medal for 2012.

“I am honoured to receive MAC’s Young Scientist Award. I thank the people who took their time to nominate me and the MAC selection committee for choosing me for this award.

Like the three wise men, my journey began in the East and continued towards the West with stops along the way. I started from India and stopped in the Middle East, where I picked-up my B. Sc. and M. Sc. degrees. I learnt some Mineralogy and Crystallography with my advisor Ishmael Hassan. Diamonds are a girl’s best friend, so I wanted to make my diamonds. So, I head off West into the high Pressure-Temperature world of Stony Brook. I did not get my diamonds, but I used diamonds in a diamond anvil cell (DAC) to squeeze some minerals.

At Stony Brook, I worked with wonderful scientists like Jiuhua Chen, Baosheng Li, Jennifer Kung, and others. From my Ph. D. advisor John Parise, I learned about diffraction and scattering techniques under different PT conditions. It was great to work with Don Lindsley to synthesize minerals and determine their composition. Rich Reeder showed a keen interest in my work on carbonates. Don Weidner took me to my first synchrotron experiment at the National Synchrotron Light Source, Brookhaven National Laboratory, to use a multi-anvil press. I thought it was going to be a regular 9-5 working day. My first experiment took 50 sleepless hours – welcome to beamline work! For me, that is when minerals and diamonds lost their (jewellery) value.

Bob Liebermann recognized some excellent results we got on spinels and directed me towards high-temperature ultrasonic interferometry with Ian Jackson at Australian National University (ANU), a diversion in my journey to the West. ANU had a relaxing atmosphere with regular morning and afternoon tea. You can also enjoy a glass of wine at lunch time under the trees on campus, and many do! I also spent some time at the European Synchrotron Radiation Facility (ESRF) in France, where we had to live on cheese sandwiches to survive the odd working hours and even give up a tour of Paris because beamtime is precious!

After New York, I continued my journey westward to the Advanced Photon Source (APS), Argonne National Laboratory (ANL) in Illinois. As a Postdoctoral Fellow at APS, I was a team member that commissioned a high-resolution powder X-ray diffraction (HRPXRD) beamline. In my group at APS, we had excellent scientists like Bob VonDreele, Peter Lee, Dean Haeffner, Chris Benmore, Brian Toby, my advisor, and others.

Coming from the East where the sun rises, my journey continued further West to the University of Calgary, where I am enjoying my sun sets. The three wise men followed a star, so I, probably, followed the Northern Lights. At UofC, I have wonderful colleagues: Ed Ghent, Jim Nicholls, to mention a few, are always there to discuss various aspects of science.

I thank my advisors and collaborators for their contributions. I thank my family for their support and encouragement. I’ll treasure this award and keep it safe, probably, under deep-earth conditions.

Thank you for listening.”