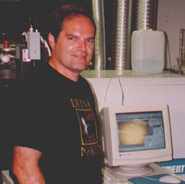 The Mineralogical Association of Canada awards the Past-Presidents’ medal to scientists who have made significant contributions to the mineralogical sciences during their career. Kurt Kyser, the medalist for 2001, really needs no introduction, as he is known to nearly all of you, either personally as a collaborator in research or by reputation for his research.

The basic theme of Professor Kyser’s work is fluid-rock interaction. Within this general framework, in the words of his nominator, the breadth of his interest is staggering. Professor Kyser began his career by examining stable isotope distributions in mantle xenoliths. More recently, his interests have expanded to sedimentary basins and the processes that occur in these complex structures that contain water supplies, oil and gas reservoirs, potash and uranium deposits. In between, he has contributed to the development of micro-analytical geochemical techniques and the study of hydrogen isotope exchange at low temperatures between fluids and minerals.

Dr. Kyser recognized that fluids passing through sediments deposit iron minerals that provide a magnetic signature to diagenetic processes. Combined with geochemistry, these studies provide additional information on the role of fluids in sedimentary basins and the timing of the processes.
Dr. Kurt Kyser is an excellent example of an outstanding scientist: intelligent, driven by curiosity, and a perfectionist with a wide range of interests. Mr. President, fellow scientists I present to you Dr. Kurtis Kyser, the 2001 Past Presidents’ medalist.

Response
I am very humbled and delighted to receive this very prestigious award. I thank with utmost sincerity those responsible for supporting, nominating and selecting me. To all of those who have provided me with support and opportunity, this award is really yours.

As this is an award from the Mineralogical Association of Canada, one of the premier organizations in the Earth sciences in Canada, perhaps the following reflection of where Canadian Earth science is going might be appropriate. When I arrived in Canada nearly 20 years ago, I was a typical American who had no real clue about Canada or Canadians or what to expect. Arriving in Saskatchewan in the middle of what was then a typical Canadian winter shocked me into reality and forced me to examine more closely my environment. I found a very high level of science that was supported by an imaginative funding agency that provided unrivaled opportunity for new researchers. Although NSERC is not perfect, it is clearly one of the best, if not the best, funding agencies in the world. The scientific environment in Canada provides boundless opportunity for researchers who are willing to try.

How has this changed over the past 20 years? Unfortunately, funding to NSERC from the government has been reduced significantly, coincident with the perception by the government that industry should do more to support science and the perception of industry that government should do more to support specific aspects of science. As a consequence, the quality of science has suffered in many different ways. In the case of the Earth Sciences, most Earth Science departments were subject to decreased enrollments of students and suffered reduced infrastructure from both their universities and funding agencies. Not all Earth Science departments have suffered this fate, with more imaginative individuals in some departments finding ways to actually promote their science. A stellar example is the host of this GAC-MAC meeting, Memorial University, which made a very concerted effort to promote excellence despite being remote from the mainland universities.

Another example of how our science has suffered is that we have remained relatively immobile as researchers during a period of time when institutions in the United States and elsewhere were vying for the best researchers in much the same way that Canadian hockey teams vie for the best players. The overall effect of this on Canadian Earth Science has been a change in scientific priorities, with many of the more quantitative aspects of our science suffering because these tend to be among the most expensive. An example that concerns all of us in the MAC is the demise, albeit brief, of the popularity of mineral chemistry.

Not soon after I arrived in Canada, Memorial started down a new path. They were the first in the Earth Sciences to develop a new and risky technology called ICP-MS. It is fitting that the GAC-MAC Meeting is here where a group of imaginative researchers including Henry Longerich, Simon Jackson, Brian Fryer and Dave Strong introduced a new technology to the Earth Sciences on the eve of significant reduction of government funding to NSERC. What have been the consequences of ‘the MUN Experiment’ On the good side, the introduction of new technology into the Earth Sciences has raised awareness of the ability of our science to be very quantitative. We have developed new technologies related to ICP-MS, such as attaching a laser as a novel sampling system. Canada has been at the forefront of developing new applications, not only with ICP-MS, but with many other analytical techniques, to measure the structure and chemistry of natural materials. During this period, we have also seen a resurgence in the popularity of mineralogy. All of these are intimately linked. Among some of the darker consequences of the introduction of new technologies such as ICP-MS is the feeling that ideas have become less important than technology. Many groups have aspired to become leaders in new technology by making radical claims that are more imagination than science. Occasionally, we have fostered an environment in which instruments are in search of problems rather than problems in search of analytical techniques to provide solutions.

In the last few years, the government has created CFI to help alleviate some of the funding pressures on other agencies and to provide new opportunities for Canadian scientists. The funding has been most generous, but not without some consequences that were difficult to foresee. Among the most severe is the great pressure that has now been placed on NSERC to support the new infrastructure provided by CFI. There has also been the perception by some that the future of quantitative science in Canada has become reckless, with significant infrastructure going to research groups of moderate quality in spite of the very high standards and rigorous reviews by CFI. Our responsibility as quantitative Earth Scientists is to see that this does not happen, that we do not become reckless and sloppy in our quantification of earth science. We must raise awareness about the problems in our science and recognize research problems of significance that require integration of both technology and ideas. We can do this by continuing to support organizations such as MAC, GAC, ODP, NSERC and CFI through our active participation in these programs. We are also responsible to our scientific community by ensuring that the reallocations exercises in NSERC have a very high Earth Science profile through a very imaginative and persuasive reallocations document. We must raise the level of quantitative Earth Science, not only so that we will survive as researchers, but that our understanding of natural processes, which we are uniquely capable of doing relative to most disciplines, is enhanced. The talent to do this is in this room, in the MAC and in the Earth Science community throughout Canada. Let us not waste this opportunity.