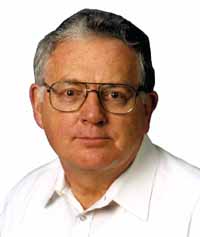 Ed Ghent received a B.Sc. from Yale University, majoring in Geology, in June 1959. He received his Ph.D. from the University of California, Berkeley in 1964. His thesis onblueschist metamorphism in northern California was supervised by W.S. Fyfe. He came to Canada as an Assistant Professor at the University of Calgary (1967). His research has been focused on metamorphism in southeastern British Columbia. His research in B.C. benefited greatly from collaboration with Phil Simony. He has always been interested in applying the principles of physical chemistry to interpret metamorphism. In particular, he has worked extensively in the field of geothermobarometry. In addition to his work on kyanite-sillimanite type metamorphism, he has maintained an interest in high-pressure metamorphism, including eclogites and blueschists. His current interests include use of P-T pseudosections to interpret the evolution of metamorphic rocks and the use of geochronologic studies to constrain the time aspects of metamorphic processes. He received a Faculty of Science Career Achievement in Research award from the University of Calgary (2001). He is happily married to Gretchen since August 25, 1962.

Perhaps his most significant theoretical contribution was his development of the plagioclase-gamet-Al2SiO5- quartz geobarometer in the early 1970’s. The development of the geothermometer, in conjunction with the biotite geothermometer, provided metamorphic petrologists for the first time with a practical, widely applicable, and relatively reliable method for determining metamorphic conditions in amphibolite terrains. Metamorphic petrologists have constructed P-T-time paths for metamorphic terrains based on geobarometric geothermometric studies that depended on the early work done by Ed.

Although the experimental studies Ed has done are not as extensive as his theoretical, analytical, and field studies, the experiments he did in collaboration with Kerrick at Penn State helped calibrate the thermodynamic properties needed to calculate mixed-volatile equilibria. These studies complemented his work with M. Stout on fluid inclusion studies in metamorphic rocks. Ghent and Stout have made significant contributions to our knowledge of metamorphic fluids.

Ed has been instrumental in developing the electron-microprobe laboratory at the University of Calgary. He has also collaborated in isotope and trace-element studies with Kyser and Erdmer in Canada and numerous other workers in the U.S.A., New Zealand, and Europe. The analytical studies he has undertaken made significant contributions to our understanding of the chemistry and mineralogy of metamorphic rocks.

Many metamorphic petrologists confine themselves to studies of a particular grade of metamorphic rocks. Ed Ghent, on the other hand, is equally proficient in studies of all metamorphic rocks and processes. In addition to his scientific work, Ed has made significant contributions to our science by serving on NSERC and Lithoprobe Committees. He has also served on the council of MAC and has helped organize and deliver short courses for both MAC and GAC.

Response
I want to thank the Mineralogical Association of Canada for honoring me with the Past-President’s medal. When I compare my accomplishments with those of other recipients of the Past-President’s Medal, I realize how little I have done. To paraphrase Tom Lehrer, “It is a sobering thought, for example, that when Mozart was my age he had been dead for 30 years.”

I feel fortunate to have had a career which has been made more interesting and enjoyable by my having worked with a number of outstanding scientists.

I first want to acknowledge my late parents who encouraged me to hop on a plane and travel 1500 miles from home to attend Yale University. The academic environment there encouraged me to consider graduate study in geology. I was in the same class as Dick Armstrong (late of UBC). Needless to say Dick was in a class by himself, even as an undergraduate.

I was a graduate student at the University of California, Berkeley at a particularly good time to study metamorphism. My supervisor was Bill Fyfe, an inspirational mentor who emphasized a critical approach to research. For metamorphic petrology, Frank Turner, and for metamorphic structure, Lionel Weiss, were extremely valuable teachers. I was blessed by being at Berkeley at the same time as a number of outstanding graduate students and post-doctoral fellows. These included: Dan Weill, Win Means, Greg Davis, Mike Holdaway, Ned Brown, Weecha Crawford, Roger Burns, Bernard Evans, and Eric Essene. I even overlapped with Dugald Carmichael for one semester.

I was lucky to have obtained an Assistant Professorship at Calgary in 1967. The Department then had 9 faculty and I was “the petrologist.” We now number over 30 faculty and have become an outstanding research-oriented institution. My colleagues at Calgary have been great. I particularly want to acknowledge Phil Simony, with whom I have collaborated on research for over 35 years. My work on metamorphism in southeastern British Columbia would have not succeeded without his contributions, both as researcher and as a friend. In addition I have worked with a number of other colleagues. I have learned a lot about thermodynamics and phase equilibria from Jim Nicholls and Terry Gordon. They have been incredibly patient answering my simple-minded questions. I would not have had much to write about without Mavis Stout’s careful laboratory work. I particularly want to mention some of my graduate students, Chris Devries, Rob Raeside, James Sevigny, Mitch Mihalynuk, Len Gal, and Kelly Russell. Kelly saw the light and switched to volcanic rocks. I have had some outstanding post-doctoral fellows: Donna Whitney, Cambria Denison, Jim Crowley, and Doug Tinkham.

Canada has been a great environment to study metamorphism. Aside from having the most isograd-miles on Earth (to quote J.B. Thompson), it has had a disproportionately large number of outstanding metamorphic petrologists and geochemists: Hugh Greenwood, Terry Gordon, Jim Nicholls, George Skippen, Greg Anderson, Dugald Carmichael, Ralph Kretz, Edgar Froese, Tom Brown, Rob Berman, Greg Dipple and Dave Pattison. I should acknowledge the contributions of many other people, but I recognize that I have limited time and space.

Finally I want to thank my wife, Gretchen, for putting up with my absences and my oftentimes misplaced devotion to my career. She has always been there to support me.