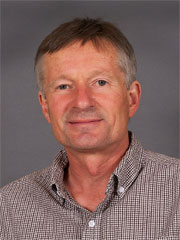 The Peacock Medal is awarded by MAC to a scientist who has made outstanding contributions to the mineral sciences in Canada. This year’s recipient is Dr. David Pattison of the University of Calgary.

Dave Pattison is one of the world’s premier metamorphic petrologists and a leading expert on the metamorphism of rocks at low pressures. Dave’s interest in contact metamorphism began with his Ph.D. thesis work on the Ballachulish aureole in Scotland at the University of Edinburgh under the tuteledge of Ben Harte. He has continued this interest with a number of superb papers on several low-pressure terranes including the Ballachulish, Nelson, and Bugaboo aureoles.

Although this area is where Dave made his initial impact, his contributions and influence are now of much greater scope. He has made major contributions to a number of different topics in metamorphic petrology including the aforementioned contact/low-pressure metamorphism of pelites, the location of the aluminosilicate triple point in pressure-temperature space, geothermometry in granulites, the metamorphism of ore minerals and ore deposits, and, most recently, the kinetics of metamorphic reactions.

As one support letter put it, the range and depth of Dave’s contributions are nothing short of remarkable. In his papers, Dave, along with his students and collaborators, combine detailed field and petrographic observations with rigourous petrologic and thermodynamic analysis to develop profound insights on the petrogenesis of metamorphic rocks, with ramifications for the thermal structure of the crust during orogenesis and cratonization, and on ore genesis in metamorphic terranes.

Dave’s papers and talks are characterized by thoroughness and attention to detail and with a depth of thought and an elegance of presentation that speaks of quality. Indeed, quality and substance permeate Dave s work and are one of the reasons why his papers are so widely cited and why he is held in such high regard by the international community.

To quote his nominator, Tom Chacko,’Science, when it is very well done, almost becomes like art; there is truth and beauty in it. In my view, Dave s science has that art-like quality to it and will, I am certain, stand the test of time.’

On behalf of MAC, it gives me great pleasure to present the 2013 Peacock Medal to David Patttison.

It is a privilege to stand here in reception of the Peacock medal. I remember listening to Hugh Greenwood in 1995 receive what was then called the Past President’s medal, and reflecting on the impact of his generation of outstanding Canadian metamorphic petrologists and thermodynamicists  Anderson, Brown, Carmichael, Froese, Ghent, Gordon, Kretz, Nicholls, Skippen – many of whom were authors in the famous 1978 MAC Short Course volume Application Of Thermodynamics To Petrology And Ore Deposits. These luminaries were the mentors of my generation and left a legacy of such breadth and depth that one of the pleasures of receiving the Peacock Medal is how it honours them as well.

As is customary, I would like to acknowledge some of the individuals who were influential in my career: my late father, Fred Pattison, a chemist at University of Western Ontario, who when I was growing up good-naturedly insisted on the provision of evidence for assertions I made, such as the fact that tea has tannic acid in it, or that the official mineralogical name for fluorspar is fluorite; the late Al Gorman, my first year geology professor at Queen s, whose blend of enthusiasm for geology and offbeat sense of humour got several of my peers and me into geology, with no looking back; Marc St-Onge, who late one night in the paleontology lab at Queen s convinced me to join him on a Geological Survey of Canada field project to Wopmay Orogen in the Northwest Territories, to study not fossils, but metamorphic and igneous rocks; Dugald Carmichael, my Bachelor s thesis supervisor at Queen s, whose child-like joy in scientific discovery was contagious and who inculcated in me an appreciation for the truth and beauty  his words  of metamorphic petrology; Hugh Greenwood, my graduate supervisor at UBC, who opened my eyes to the rigour and elegance of thermodynamics; Ben Harte, my PhD supervisor at Edinburgh University and an exacting field petrologist, who kept my feet firmly on the ground, and whose measured expressions of encouragement were some of the sweetest sounds I can recall; and Bob Newton, my postdoctoral supervisor at University of Chicago, whose genius as an experimental petrologist and bottomless intellectual curiosity and creativity opened new vistas for me.

I am grateful to Ed Ghent, then Head of Geoscience at University of Calgary, for hiring me, a fellow metamorphic petrologist, for a position in economic geology. I have benefitted from the intellect and insight of my other Calgary petrological colleagues, Terry Gordon and Jim Nicholls, and the profound knowledge and wisdom of Philip Simony, a living legend of Cordilleran geology. Of my extra-Departmental colleagues who have been such wonderful collaborators, I reserve special mention for Frank Spear of Rennselaer Polytechnic Institute, one of the most impressive scientists I know.

While at Calgary, I have had the pleasure of working with a superb and diverse group of graduate students, post-doctoral fellows and undergraduate research students. By not naming them, I hope that does not diminish the respect I hold for each of them as scientists and individuals. In closing, I thank Tom Chacko of University of Alberta and his fellow nominators for putting my name forward for this award, and my wife Catherine and daughters Laura and Anne for their patience and forbearance in allowing me the freedom to journey down this stimulating road.”