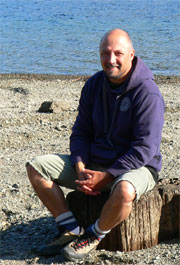 Dante Canil was born and grew up in a rural setting near Windsor, Ontario, where he nurtured a love of the outdoors, fed by stories of Canada’s remote north. He completed a BSc in geology at the University of Windsor in 1985. He went on to do a PhD at the University of Alberta under the tutelage of Prof. Chris Scarfe, who introduced him to pieces of Earth’s mantle and the ‘black art’ of experimental petrology. Dante was attracted by the possibility of examining rocks from deep in the Earth and simulating those same conditions in the lab. After completion of his PhD in 1989, he spent four years as a research scientist at the Bayerisches Geoinstitut in Germany, where he crossed paths with and learned from many international researchers. Dante arrived at the University of Victoria in 1994, joining the then recently formed School of Earth and Ocean Sciences, where he has remained ever since. He became a full professor in 2003 and a Royal Society of Canada Fellow in 2011. Dante combines experiments and fieldwork to study the origin and evolution of Earth’s mantle, mantle-derived magma, diamonds, and the transport of magma to the Earth s surface. He is particularly attracted to processes involving ‘redox’ (a mental hurdle in high school) and research problems where his discipline can overlap with that of others.

Dante Canil has made diverse and profound contributions in the Earth Sciences. His impact has been broad and deep. His studies of mantle redox and atmospheric evolution provided the first estimate of paleo-oxygen fugacity in volcanic rocks and their complementary magma residuals. He did this by systematically measuring and studying the partitioning of vanadium between minerals and melts. His revolutionary findings have had broad impacts, including in debates of the origin of life and the evolution of oxygen in the Precambrian atmosphere.

Two decades ago, Dante conducted groundbreaking high-pressure research on the origins of kimberlite magmas deep in the mantle, and he evaluated the speed at which these magmas move to carry diamonds. He showed that kimberlite magmas must be water-rich and fluid during ascent. He examined the incredibly wide range of oxygen fugacity of kimberlite magmas, and correlated it with their depth of origin. Dante has studied the trace element contents of thousands of garnets from tens of kimberlites to map the extent of Archean mantle beneath North America. He also used minor element systematics to constrain the origins for over 1200 samples of mantle lithosphere from the Archean to present, impacting our understanding of the tectonic environment of Earth’s earliest mantle lithosphere. He has shown that some of the deepest parts of the mantle ever sampled by kimberlites may retain the imprint of their interaction with Earth’s hydrosphere, billions of years ago under an Archean ocean.

Dante’s research in ultra high-pressure rocks has used an innovative interdisciplinary approach combining field mapping, thermobarometry, geochronology, and geochemistry to discover orogenic mantle massifs in the Yukon, and the first recognition of exhumed ultrahigh pressure rocks in the Cordillera. These discoveries have changed our understanding of the Cordillera and its evolution.

In addition, Dante has greatly influenced many students over the years. Despite his ground-breaking laboratory research efforts, he remains an active and accomplished field geologist.

For outstanding contributions to the mineral sciences in Canada, MAC is pleased to present Dante Canil with the Peacock medal for 2012.

Response
“Ladies and Gentlemen, MAC President, Executive and members, thank you very much. I am grateful, delighted and humbled to be bestowed this award.

Our lives are journeys. In my journey to here there are of course a number of people and events that I would like to acknowledge. Firstly, my parents, who were exceptionally hard working and energetic. They taught me the value of a great work ethic, to have pride, but to be humble and modest. Though not scientists, they instilled in me the notion of ‘critical thinking’. I was often on the receiving end of that ‘critical thinking’. This easily set the stage later for a career involving ‘peer review’, and pointed questions after lectures.

At the University of Windsor, Dr. Karen St. Seymour, introduced me to the beauty of igneous rocks, and to the lure of fieldwork in remote regions. One day I skipped classes and took the train to Toronto, where Norm Trowell gave me a summer job ‘on the spot’ with the Ontario Geological Survey. Two incredible summers followed in a world-renowned Archean greenstone belt. Komatiite lavas gave me an appreciation for all things in the earth that were either too deep, too hot, or too old to be witnessed. This led to the University of Alberta, Chris Scarfe showed me to the ‘black art’ of experimental petrology during my PhD. He promoted independence, and instilled in me the need to excel. From him, I also maintain a great sense of balance and humour about science and the scientists doing it. Chris conveyed the spirit of learning new territory together with a student, something I too cherish. His words also resonate every time I write a paper: ‘keep it short, sharp and shin’. A pre-doctoral fellowship at the Carnegie Institution in Washington introduced me to Dave Virgo and Bob Luth, who forced me to use more rigour. During post-doctoral studies in Bayreuth, Germany, from I learned from Don Dingwell and Hugh O’Neill how and when to extrapolate one’s measurements for greater impact.

In 1994 I was fortunate to land a job at the University of Victoria. There, Chris Barnes nurtured the idea of connecting one’s own discipline with that of others. I jumped at the chance to think beyond igneous rocks and the deep mantle, to its interfaces with the hydrosphere and atmosphere. There I eventually crossed paths with Stephen Johnston, who lured me to more fieldwork, but in steeper mountainous terrain, and to the hard won results to be found there. I especially thank him for this nomination, his optimism and his friendship.

On a personal side I wish to thank my wife Terri for her support, encouragement and companionship. I also thank my daughter Olivia, whose growth has put scientific discoveries in the perspective of great personal ones.

Lastly, I want to thank all other scientists here. I read or know of your work, and it sets the bar for me. I am grateful for all the thrills and fortunes I’ve had in discovery – a re-drawn geologic map; strange garnets in sediments; failed experiments leading to a better hypothesis; or even discovering that key paper in the library, by accident.

On a final note, I hope as a scientist I can instill to others who follow the beauty of digging, learning and discovery of something unique, in the real time and effort that it takes to do that ‘days, weeks, years’ and not just downloaded in bytes in seconds. For any youthful scientists here, I would encourage you to read widely, beat your own drum, and see how your science is relevant to other disciplines. It can be easier to follow the paths of others before you, but in the journey to discovery it can be even more exciting to try the motto of Emerson: Do not go where the path may lead. Go instead where there is no path and leave a trail.

Thank you all again for this honour.”