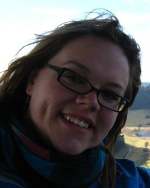 Sarah holds a M. Sc. in Geology from Laurentian University, where she studied hexagonal and monoclinic pyrrhotite from the Copper Cliff Offset Dike in Sudbury, Ontario. She attended the University of New Brunswick for her Bachelor of Science, Honours and completed an undergraduate thesis on shoshonitic lamprophyres from Mali, West Africa. She has been the recipient of several entrance scholarships as well as UNB’s Tech Scholarship. She won the Frank Shea Memorial Award for the best paper presented at the Atlantic Universities Geoscience Conference in 2010. She has been working with industry and government surveys since 2008, in various parts of Canada, including Nunavut, Ontario, Manitoba and New Brunswick. She is currently working with TerraX Minerals in the Yellowknife greenstone belt and is hoping to begin a PhD project in the near future, looking at gold mineralization throughout the belt. 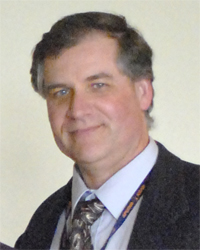 Andy is an applied mineralogist in the Department of Earth Sciences at Laurentian university. His background is firmly planted in the crystal chemistry of minerals, which he uses to solve geologically relevant problems, specifically those in the areas of HFSE (Ti, Zr, Nb) mineralogy, platinum-group minerals and sulfides from magmatic ore deposits. He obtained a B.Sc. (Hons.) from the University of Toronto (1987) and graduate degrees from Carleton University (M.Sc. 1989, Ph.D. 1992).

He joined the faculty at Laurentian in 1992 and currently holds the rank of Full Professor there. He volunteers his time with the International Centre for Diffraction Data, is the Canadian member of the IMA Commission on Ore Mineralogy (COM), was former Associate Editor of the American Mineralogist (2010-2013) and has served as the Vice-Chair, COM (2010-2013) along serving on the former IMA Commission on the Classification of Minerals (1996-2002).

The 2016 Hawley Medal was awarded for the paper A STUDY OF THE COMPOSITION, DISTRIBUTION, AND GENESIS OF PYRRHOTITE IN THE COPPER CLIFF OFFSET, SUDBURY, ONTARIO in The Canadian Mineralogist 53, part 5. This paper combines several analytical approaches to explore how polytypes in the pyrrhotite group can be identifies and quantified. Furthermore, the use of PXRD is applied to evaluate the ratio between two polytypes, and their distribution in various units is used to explore various ore body types. As such, this paper is truly ‘applied mineralogy’, and combines everything from structure to trace element data. Another important thing is that the current authors are aware of the issues with quantitative Rietveld refinements and my analysing the same samples more times and comparing it with other techniques creates and estimate on the actually uncertainty of their analyses. This is something, which is hardly ever done, and authors tend to rely on uncertainties provided by the software, without checking it against the real world.

“More than 50 years ago, J.E. Hawley and J.L. Stanton wrote an extensive, definitive paper on the mineralogy of Sudbury ores titled: “The facts: The ores, their minerals, metals and distribution” in our fledging journal, The Canadian Mineralogist. This particular contribution has proven to be one of the most comprehensive studies broadly made on the ore mineralogy of Sudbury ores and to a large extent, has stood the test of time. It is thus extremely fitting that our contribution on one key aspect of these ores, the mineralogy, textures, chemistry and distribution of pyrrhotite, was selected for the 2015 J.E. Hawley medal.

We are humbled by receiving this award, but are most grateful that the committee making this difficult decision considered our study to be one that merited the type of attention that the medal’s namesake, Prof. Hawley, would have likely approved. Our study, which was graciously supported by Vale, sought to address a fundamental question in regards to the distribution of the two major types of pyrrhotite in several ore bodies from one mine, the Coppercliff offset mine, which is positioned to be the premier mine for Vale in the Sudbury camp, and to determine the mechanisms influencing this distribution. The study was somewhat ‘old school` in that it was soundly based on targeting specific ore bodies, collecting samples in-situ and understanding the materials with which we were working in as comprehensive a manner as possible. This was followed by detailed analyses of ore samples via such fundamental techniques including reflected-light microscopy and image analysis, then mineral chemistry (SEM-EDS, EMPA, LA-ICP-MS). However, it also employed a novel approach involving powder X-ray diffraction and Rietveld analyses to quantitatively evaluate the distribution of the two basic pyrrhotite types. While our research was able to convincingly establish the distribution patterns involving pyrrhotite and to determine which factors were not influencing these patterns, the specific factors at play still remain elusive. Another aspect that turned out to be highly interesting was that the paradigm that there are always differences in the Ni content of one type of pyrrhotite over another, simply did not hold in the samples we examined. Scientists working on magmatic sulfide deposits have traditionally relied quite heavily on experimental phase equilibria in the Fe-Ni-S system to explain all that is seen, but in the end, one implication of our findings is that it might be time to revisit things. In the end, science should always include a certain amount of speculation and in this respect, the door to the absolute answer in regards to understanding the very ‘simple’ family of minerals known as pyrrhotite, continues to remain ajar.

In conclusion, we would like to express our sincere thanks to the Hawley medal committee (L. Groat, Jacob Hanley, Henrik Friis, and Adriana Heimann), to Vale staff (C. Gauld, C. Davies, F. Ford) and to the MAC volunteers (R. Martin, L. Cabri), all of who helped in making this study a reality, worthy of both publication in The Canadian Mineralogist and for the 2015 Hawley medal.”