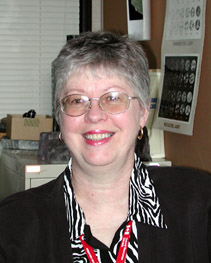 The Berry Medalist for 2003, Gina LeCheminant, served the Association as Councillor and Secretary for 13 years. During her tenure on Council, Gina contributed to the transformation of the Association to its new business model, and was a catalyst in the establishment of the Foundation.

Graduating from the University of British Columbia B.Sc.(Hon) 1969 she worked in the private sector and consulting prior to joining the Geological Survey of Canada in 1981 as a mineralogist, microprobe analyst, and uranium deposit geologist. She continues to work at Natural Resources Canada as research manager of the GSC analytical and applied geochemistry and mineralogy laboratories. Recipient of the Golden Jubilee Medal in 2002, she resides in Manotick, Ontario where she is active in community affairs.

Ladies and gentlemen, MAC executive and Council Members,It is my pleasure today to introduce to you the 2003 MAC Berry Medalist, Ms. Gina LeCheminant. Gina actually graduated from the University of British Columbia a few short years ago, thus it is only fitting that she be honoured here today, back at her alma mater. After graduating from UBC, Gina worked in the private sector and then moved onto the Geological Survey of Canada in 1981, where she occupied various roles from mineralogist to uranium deposit geologist, before becoming the research manager of the GSC mineralogical and geochemical laboratories.

Gina is being honoured here today for her unselfish service to the MAC as a member of Council and Executive over an extended time-period; in fact, she served as Councilor and Secretary for 13 years. In these roles, Gina brought to MAC council meetings an important continuity and historical legacy of the organization that proved on many occasions to be a tremendous asset, the modern vernacular for this is corporate memory, as our current president Norm Halden likes to remind us! Of particular note, however, is that Gina, perhaps unknowingly, performed

a role during the mid-1990s that deserves special recognition and it is for this that she has been singled out as the 2003 Berry Medalist. From discussions with several of her contemporaries who shared the round table with Gina at MAC meetings, the unanimous consensus was that Gina is blessed with an unquavering spirit, and was known to provide gentle prods on issues that she took to heart. In many cases, these issues were somewhat contentious for the reason that they involved change, a term that some on council evidently preferred to have fossilized rather than embrace, or so I have been told. However, Gina realized that the 1990s were a time of change and that MAC, unlike the dinosaurs, did have a choice of how to embrace some of this change. Of particular relevance were the changes in how business was being done, which was something pretty foreign to the mineralogists and academics of the time. As it turns out, this foresight was to a large extent responsible for making MAC the financially healthy organization that it is today. Thus, some might say, in hindsight, that Gina was a visionary.

Part of Gina\’s vision was that MAC required a business plan to address operations of the organization in order to not only ensure, but to guarantee a healthy and secure financial future, which is where we find MAC today. In fact, Gina continues to sit as Executive Secretary to the MAC Foundation, which she was so instrumental in establishing. It is perhaps fitting, therefore, that today sitting with Gina and enjoying this luncheon is living testament to Gina\’s vision, as we have with us two of the brightest, young scientists around who are also being honoured by MAC and, who, we expect will represent the future of this organization. It is because of the healthy finances of the association, of which Gina contributed so much towards, that the organization is now able to provide financial support to such deserving, young and promising individuals.

Where as bigger and wealthier organizations provide such visionaries with stock options, big bonuses, use of their private jets and lavish retreats, we hope that the Berry Medal for 2003 will be accepted by Gina as a suitable proxy for her worthy services. It carries with it our deepest gratitude for her efforts in guaranteeing a bright future for the Mineralogical Association of Canada and those that are part of it. Please join me in congratulating Gina and showing our appreciation for her efforts to the society.

“During my tenure of some thirteen years on Executive Council, four things stand out for me – changes that I supported, promoted, or even instigated. I want to remind you of those changes because I believe they have transformed the Mineralogical Association of Canada into what it is today.First, Council balanced the budget in a time of declining reserves. This was controversial, as it required increasing dues for both personal and corporate or library memberships, and lowering journal costs in an environment of increasing expectations for quality and colour. These decisions risked the core membership of the Association, but the outcome proved the risk worth taking.

Second, Council took the conscious decision not to anticipate a surplus from its support of Canada’s premier geoscience meeting held jointly with the Geological Association of Canada. This permits budget forecasting that includes the risk of loss, but permits the Association to invest any meeting surplus in support of its charitable purpose.

Third, Council transformed the business model of the association into what it is today. This was an important philosophical shift that recognized MAC is not just a dues club that provides its members with The Canadian Mineralogist. It is, instead, an entity with a dual purpose: to provide member services, and to efficiently run a small international publishing house. Recognizing this duality permits Council to commit fully to its charitable endeavour, and at the same time plan its publishing future according to sound business principles.

Last, and perhaps what I am most proud of, was the establishment of a separate charitable entity, the Mineralogical Association of Canada Foundation, to provide scholarship awards and other financial support to graduate students pursuing geoscience research in all the areas promoted in The Canadian Mineralogist. The Foundation holdings now stand at some three hundred and fifty thousand dollars and support one major scholarship grant per year as well as travel grants for students to the GAC-MAC annual meeting and other meetings such as the IMA. In the coming year, the Foundation will mount a matching-dollar campaign to increase its holdings, with a short-term target of a half-million dollars and a longer-term target of one million dollars. I remain on the Board of Directors of the MAC Foundation, and I am making a personal request to you today to support, personally and in your place of work, this fund-raising campaign when it is launched.”